After my research now should think about how can I achieve my goal. I know what I am going to use but my idea is crucial. I should find out a way to show the messages that focus on human perceived needs and idea that “purchasing things is, in itself, a pleasurable activity“. Also ı should add my gantt chart : selinsargut-ganttchart

Adbusters describes itself as anti-advertising: it blames advertising for playing a central role in creating, and maintaining, consumer culture. This argument is based on the belief that the advertising industry goes to great effort and expense to associate desire and identity with commodities. Adbusters believes that advertising has unjustly “colonized” public, discursive and psychic spaces, by appearing in movies, sports and even schools, so as to permeate modern culture. Adbusters’s stated goals include combating the negative effects of advertising and empowering its readers to regain control of culture, encouraging them to ask “Are we consumers and citizens?.”

Subvertising is a portmanteau of subvert and advertising. It refers to the practice of making spoofs orparodies of corporate and political advertisements.[1] Subvertisements may take the form of a new image or an alteration to an existing image or icon, often in a satirical manner. A subvertisement can also be referred to as a meme hack and can be a part of social hacking or culture jamming.[2] According to AdBusters, aCanadian magazine and a proponent of counter-culture and subvertising, “A well produced ‘subvert’ mimics the look and feel of the targeted ad, promoting the classic ‘double-take‘ as viewers suddenly realize they have been duped. Subverts create cognitive dissonance. It cuts through the hype and glitz of our mediated reality and, momentarily, reveals a deeper truth within.” 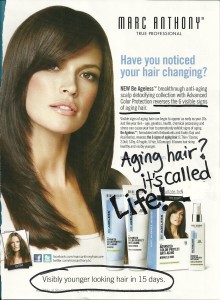 UPPERCASE magazine : Issue 20 marks 5 years of UPPERCASE magazine! This is an amazing feat considering that we are a small publication with little or no advertising, fully supported by our readers and subscribers. 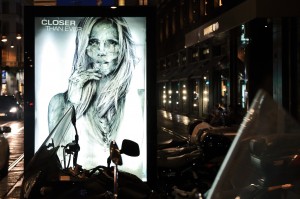 By using the advertising space and how the human figures are represented in that space, Vermibus is removing the masks that we wear and is criticizing advertisement which takes away a person’s identity to replace it by the one of the brand. 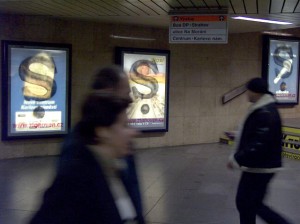 “You might think it doesn´t concern you, but advertisement gradually and unobtrusively invades the subconsciousness of each and everyone one of us.

It is our turn now. We abuse advertisement, the one constantly abusing our innermost desires, thoughts and feelings in order to sell goods. We twist, modify and transform advertisement so it speaks the language of art for at least a while. We create different commercials, those you cannot miss, and those which invoke restlesness.” 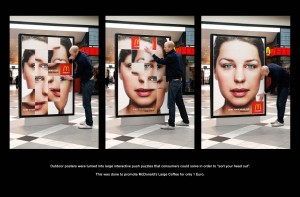 I can make the opposite, taking a poster and putting it into smaller pieces and mixing can be an other idea.