My original project included making a sculpture of the robot’s head using aluminum. I have bought the materials and made 2 versions (second one was the upgraded version of the first one.). But after making the second one, I had a major allergic reaction to the material and had to abandon the whole sculpture making process completely. So, for the last 2 weeks I have been watching tutorials about OOP and Flash Builder, and built up the whole web-site for the Social Educator from ground.

I have managed to write all the necessary code for the game, but little problems still exist, like the background giving a little gap before looping, and the actions overlapping without waiting the other one to finish. I am going to correct them ass soon as possible. Also, I need to add the database for the project and publish it online.

This is what I have done so far. 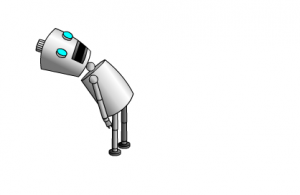 project definition
An interactive installation project that will refer to the patterned social arrangements that determine the actions of the individuals socialized into that structure.

objectives & goals
The goal is to analyze the way a society’s norms and ethics shape the behavior and morality of individuals within the social system. Mainly it is about how a person’s understanding of  “the acceptable behavior” is shaped through social interactions.

The objective is to execute the project with various social groups and classes and overall come to a realization of how the sum of their cultures and backgrounds define the rules for appropriate and inappropriate values, beliefs, attitudes and behaviors for an individual.

target audience/user
Project can be executed with various classes of people. Age limit starts with teenagers.

background information
With this project,

1. In the short-run we will be able to see the attributes of the society we live in, that being the behaviors or actions the majority believe within our society to be acceptable and vice versa.

2. In the long run, if the project could take place in different cultures, social groups or social classes, we will be able to compare the datas that are collected and analyze the similarities and differences of their own understanding of norms and morality.

In the end, understanding and knowing the generalized information on specific groups and classes would help a person to know the way to behave in those societies.

My biggest challenge is that without acquiring information about a large range of societies, the outcome would not be totally satisfying. But nevertheless we will be able to see how our society’s norms are structured now that there are a lot of mixed classes, groups and cultures live within. But again if the people that will participate will be from a specific group, then we will only be able to analyze that groups enforcements on individuals.

I will learn to make a sculpture out of a mold, understand the way a sensor works, and advance in programming and making animations.

detailed project description
Project will consist of a screen playing an animation on the wall, and the face of the protagonist as a sculpture in front of the screen. The material for the sculpture will be rubber. There will be sensors inside the rubber sculpture, on specific points of the face.

The animation is about an “alien” who has just landed on earth and doesn’t know how to act in a social structure. We will see him in a regular environment, doing everyday activities. Some of his actions will be considered as “appropriate”, some of them will be considered as “wrong” and some will be ethical dilemmas. For example: While walking you notice a man drop 50ytl on the floor. In the first scenario our character takes it and walks away, in the second one he runs after the guy and gives the money back to him.